GARDEN CITY SCHOOL@TULLINGE
The site of building consists of two halvs: a low periodically flooded part of land and a cliff of granite, difficult and expensive to build on. Together with a very restrictive detail plan for the new Tullinge Garden City that set a special ‘idyllic’ visual code of traditional Swedish garden cities it resulted in a two floor building stretching along the edge of the cliff. Building consists of two bodies, one coming out from the rock, white, hard, and concrete, the other, along the forest, wooden, dark and soft. In the meeting point of these two bodies there is a third element, a triangle open through all floors, creating a vertical square, plaza, entrance, connection, link. Its materials are glass and grass (and a preserved old oak at the visual axes).
The plan of the building is as regular and generic as possible, allowing the fluctuation of number of students and classrooms, the flexibility of modelling and remodelling the rooms was highest priority by the client. As a Garden City School and the swedish concept of school as ‘home study’ the facades are closer to traditional housing, melting into the neighborhood, and camouflaging into the woods. The low part of the site was turned into sportsfield / skating rink in winter. SWE 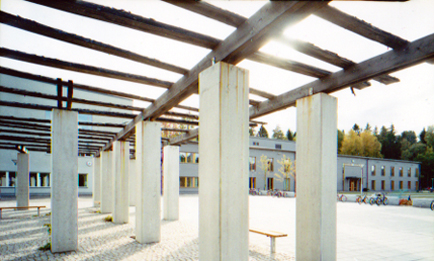 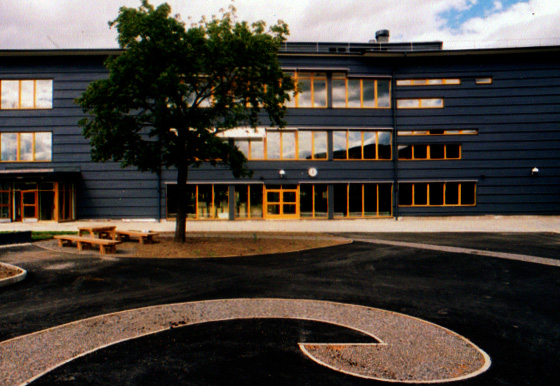 TUNA SCHOOL (AND SPORTSHALL)
A school for thousand students in the center of Botkyrka, the poorest and most problematic commune in Stockholm area, was a challenge in multiple ways and became a very social project. In order to reduce noise but as well damage by violence and misbehaviour the shoes inside the school were forbidden, making the school a logistical project, connecting and separating the three buildings, classroom areas and public areas in a way that “shoeless” trajectories do not mix with the ones where shoes were allowed. The school has three parts: one for older students, another for younger students, and a main building with special classes, a cultural center and restaurant open for public.
The sportshall is an appendix to already existing one, picking up the materials from the neighbourhood as zinc and concrete, but softening it with wood and wooden print on the panels and using a big stripe of glass windows that elevate and ‘hold up’ the concrete body of the hall and work as an inviting lantern. SWE

View all posts by iliilil